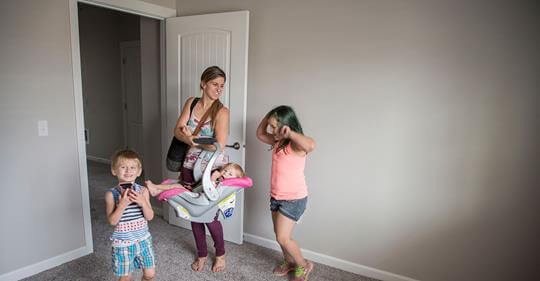 Susan Qualey led a caravan of four children to their new home, a three-bedroom apartment on Salem’s north side. It was the family’s first time seeing their slice of the Cornerstone Apartments at 2540 Rose Garden St. NE. The complex, which opened this week, was the first in a set of Local Innovation and Fast Track homes to open after Oregon lawmakers approved $120 million toward the program in recent years.

“Oh, wow,” she said as she walked in. Less than a minute passed before one of her daughters, Savannah, 8, was staking claim to a bedroom for her and her little sister.

“In this room, that’s me and Brooklyn’s.”

The next day, Qualey said she didn’t know where they’d be staying were it not for the Cornerstone Apartments.

“To be honest, getting approved and living here was a God shot for me,” she said. “I feel it’s truly where God wanted me and my children because everything just worked.” The apartment featured spacious bedrooms, its own washer and dryer and sleek kitchen counters. State officials are betting big that developments like the Cornerstone Apartments from Salem to Ontario will ease the state’s housing crisis.

“The state has thousands of homes under construction across the state, and LIFT has been a catalyst to leverage federal resources, and bring in local and private investment, to increase Oregon’s supply of housing,” said Margaret Salazar, director of Oregon Housing and Community Services, the state’s housing finance agency.

“LIFT focuses on serving rural communities and communities of color who are bearing the brunt of Oregon’s housing crisis,” Salazar said. “We are working hard to make sure that doors open across the state for all Oregonians.” Tenants at Cornerstone must be part of households that live with at or less than 60 percent of the area’s median household income. The Salem area’s latest figure was $67,300 a year, according to the U.S. Department of Housing and Urban Development.

Rents at the 180-unit Cornerstone Apartments range from $630 to $920 a month, which will net tenants a studio all the way up to a three-bedroom unit. Some apartments are still under construction, and only a handful of leases have been signed.

When finished, the complex will hold 48 three-bedroom units, 96 two-bedrooms, 24 one-bedroom, 12 studios, with three units set aside for management, said Beth Hays, chief executive of nonprofit Community Resource Trust, one of the lead entities involved in developing the apartments.

Hays said the project came about after Community Resource Trust and Mountain West Investment Corp. officials started trying to find a way to address the local homelessness issue. They reviewed literature, and talked with organizations and the homeless themselves.

They took a broad view of the the housing spectrum, from homelessness all the way to home ownership, she said. The conclusion: The best way to help is providing affordable housing.

“That was a missing piece,” Hays said.

This was the first affordable housing project for Community Resource Trust, officials said. They partnered with Mountain West, which has a history of developing multi-family housing. Local firm Shelter Management, Inc., is managing the property.

It’s taken more than $20 million in public and private investment to build the complex.